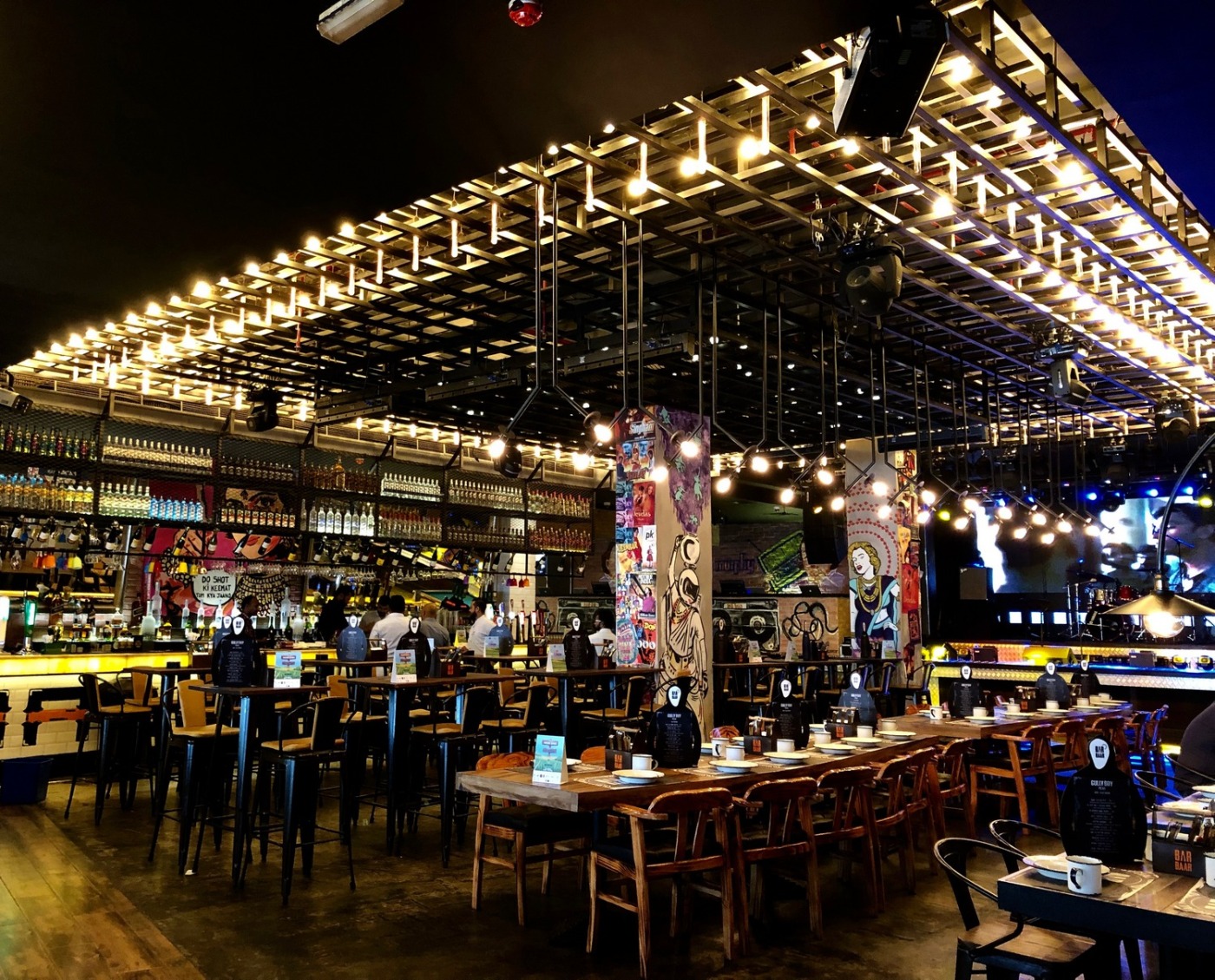 Bar Baar is quite famous among those who frequently visit pubs and bars in Dubai. Seeing all their Instastories, I too wished to visit this place. And a few days back, my dream came true when they were launching their new menu and I was invited. Aptly named ‘Gully Boy’, this new menu features street food from the gully (meaning street) of India, mainly Mumbai. The idea behind naming it Gully Boy, is the recent Bollywood movie of the same name that features foot-tapping rap songs, rising from the streets.

Bar Baar defines itself as a social hub and gastropub and has been open for almost a year. It is located at the Majestic Hotel in Bur Dubai, with a separate entrance from the outside of the hotel. After passing through a couple of doors, I stood in a large room with a huge bar to one side, a stage for live performance, a live kitchen corner, funky walls, a massive seating area, an equally impressive ceiling and the song “apna time aayega” from the Gully Boy movie blaring in the background. 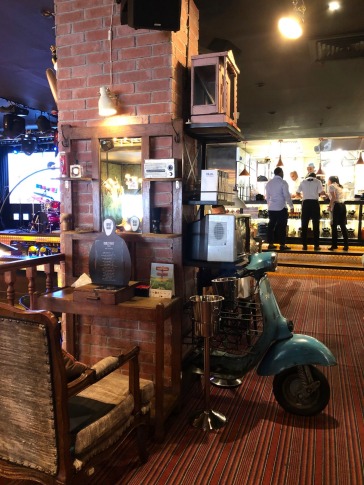 Coming to the newly curated menu, ‘Gully Boy’ has a vegetarian and a non-vegetarian food menu and separate cocktail and mocktail menu. The names of dishes resonate with the ‘street’ theme and it brought out the ‘tapori’ in us. Since it’s the Lent season, I tried only the vegetarian and mocktail menu. Don’t be disheartened as the veg. menu is equally impressive as the non-veg., according to my friends. 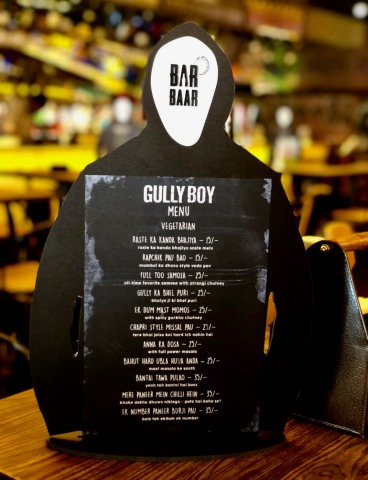 First up we had Ek Dum Mast Momos. Momos (dumplings) as they are fondly called in India, is a much-loved street-side food, found at every nick and corner. Since I was having the veg. version, mine was filled with spicy minced veggies, and served with a green chutney and a spicy red chutney. Then we had Raste Ke Kanda Bhajiya and Chapri Style Missal Pau. The bhajiya was warm and crisp and served with really spicy green chutney and if that wasn’t enough, it was also served with a spicy red powder. The missal pau is gravy-based and thus is different from how it is usually served. It was just ok. 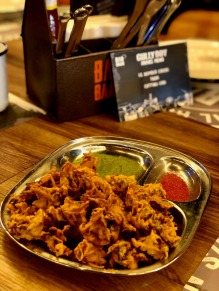 For drinks, I had Imami Sherbet and Raspberry Soda. The sherbet is a mixture of watermelon juice and milk and it was really delicious. I had it a couple of times 😊 The raspberry soda was not that great ☹ 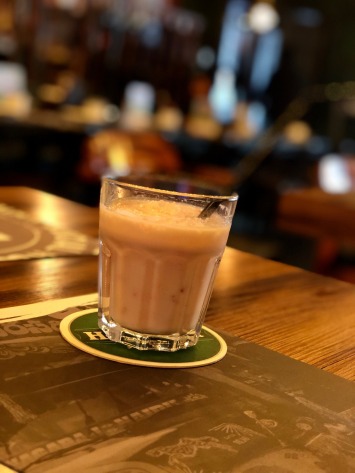 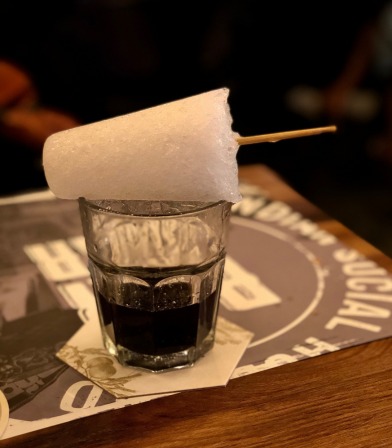 We also had Bantai Tawa Pulao and Mere Paneer Mein Chilli Hein. The pulao is typical Indian-style and this has to be the only dish on their menu which wasn’t spicy!!! That was a relief 😉 The paneer was Chinese-style and really hot but very delish.

I think the reason why they make all their dishes so spicy is because spicy goes well with alcohol. Also maybe because Indian palate craves spicy!!! Whatever the reason maybe, the food did have flavour and I can’t wait to go back and try the non-veg. dishes.

One thing that I’d like to add is that they should have some desserts, like jalebi or any other street-food sweets on the Gully Boy menu.

There was a live band too that entertained us with many peppy numbers that really got most of us dancing.

The overall vibe and ambience of the place is amazing. This is a must-visit place to hang out and enjoy some good food and drinks with some foot-tapping live music.

This recently opened lounge in Dubai is definitely one worth visiting!! The ambience is brilliant and the food even better.
Mamaearth is known for their natural skin & hair care products, and today I’d like to show you their Vitamin C Skincare Range comprising of a Face Wash & a Face Serum.
When life throws you a rainy day 🌧, play in the puddles ☔️!!!
A Bird’s Eye View of Gardens & Discovery Gardens
🥚Back to School with Golden Eggs🥚
I don’t need to fall for anyone.. hairfall is enough for me!! Now that also seems a thing of the past, thanks to Mamaearth’s Onion Shampoo that helps to control hairfall & promote hair growth.
𝐖𝐡𝐚𝐭 𝐢𝐬 𝐩𝐢𝐳𝐳𝐚 𝐭𝐨 𝐲𝐨𝐮??
Have you tried this Organic Greek Mountain Tea?
This giveaway is now closed!!!
🍮 Créme Caramel, Flan or Caramel Custard 🍮….. Call it what you want!!
Gazing away at 𝐖𝐨𝐫𝐥𝐝’𝐬 𝐄𝐧𝐝 !! Guess where this is located… 🤔
𝐀𝐭𝐨𝐩 𝐭𝐡𝐞 𝐡𝐢𝐠𝐡𝐞𝐬𝐭 & 𝐭𝐡𝐞 𝐨𝐧𝐥𝐲 𝐞𝐱𝐢𝐬𝐭𝐢𝐧𝐠 𝐡𝐢𝐥𝐥𝐭𝐨𝐩 𝐟𝐨𝐫𝐭 𝐢𝐧 𝐭𝐡𝐞 𝐔𝐀𝐄 🇦🇪!! Any guesses?