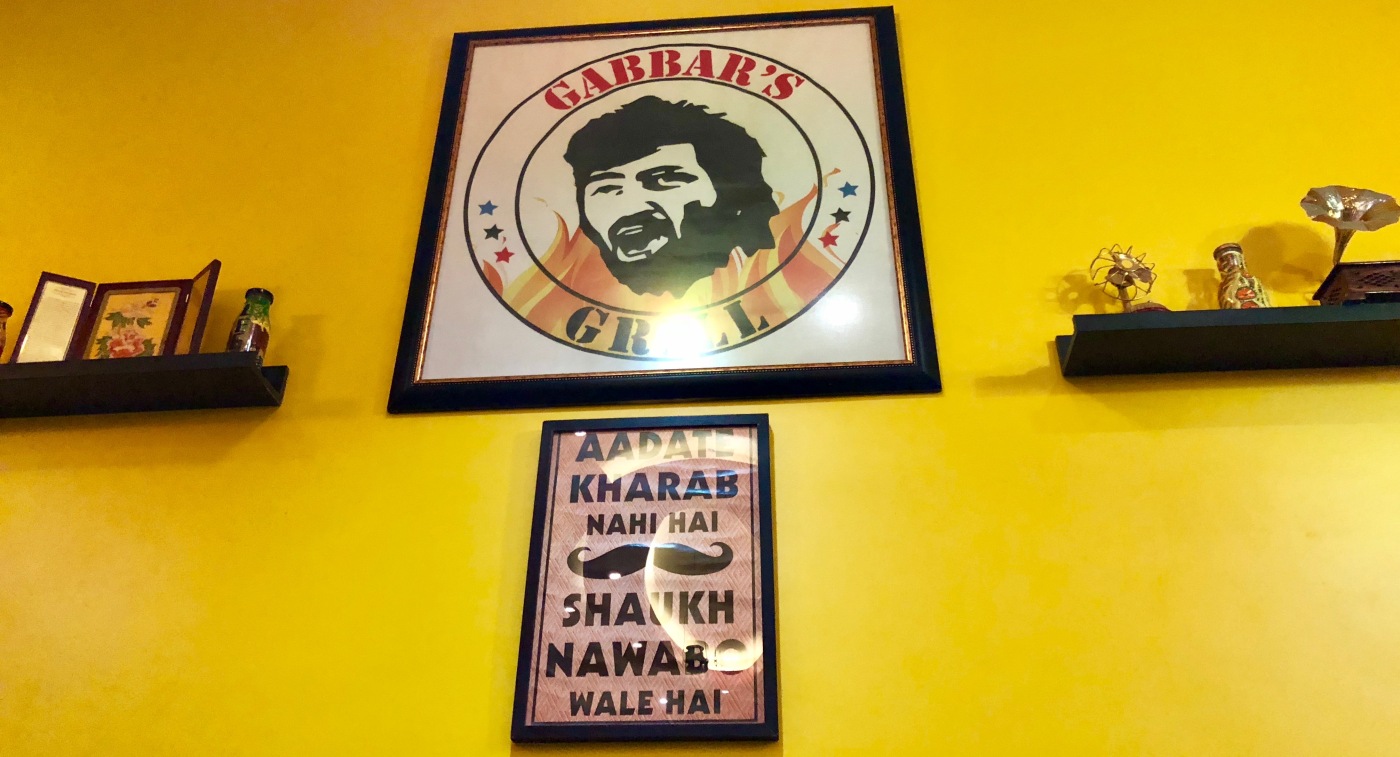 Have you watched ‘Sholay’…?? What…??!!! You haven’t….how can you not have watched such a classic movie which was ranked first in the British Film Institute‘s 2002 poll of “Top 10 Indian Films” of all time!!! Just kidding…. We both are in the same boat. I’ve watched many a scenes and songs from this classic and am familiar with many of its famous dialogues, but I haven’t watched the complete movie. Sholay fans, please excuse!!!

Whether you’ve watched ‘Sholay’ or not, your bound to have a wonderful time at this quaint restaurant named after Gabbar, the infamous dacoit from the movie, by reading famous lines from it that’s all aroundand the dishes too have names inspired by it. 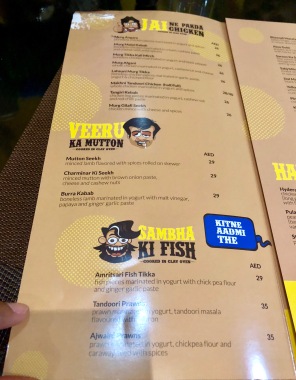 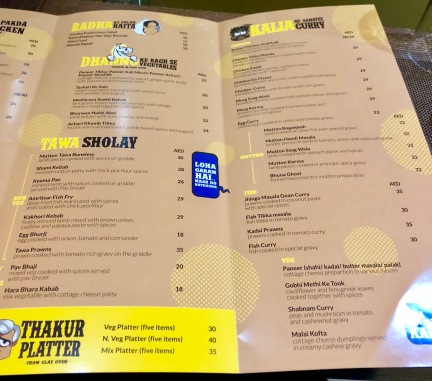 Located in Discovery Gardens, in Jebel Ali, Gabbar’s Grill specialises in food from the northern part of India, be it veg. or non-veg. This restaurant shares its dining area with Lee’s Wok, which specialises in Asian cuisine, basically Chinese, Filipino and Thai. But what I found intriguing is that they have two different kitchens and different cooks for both cuisines. They have tried to keep the authenticity of the food that they offer.

I was really excited when I was invited to try Gabbar’s Grill. The interior exudes warmth and a fun atmosphere where much care has been given to tiny details like images of Gabbar himself, kites hanging from the ceiling, small Indian artefacts placed all around, and hand-painted bottles to reiterate the fact that recycling can be done by anyone, anywhere in anyway. 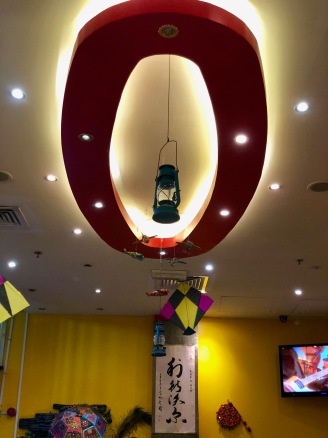 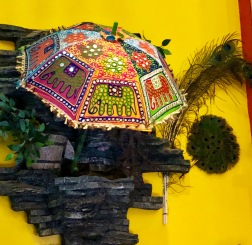 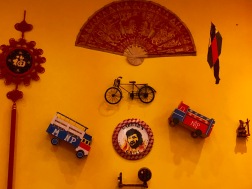 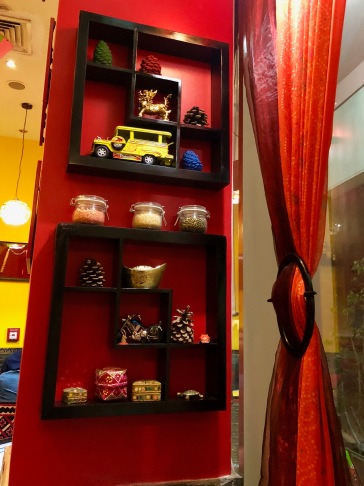 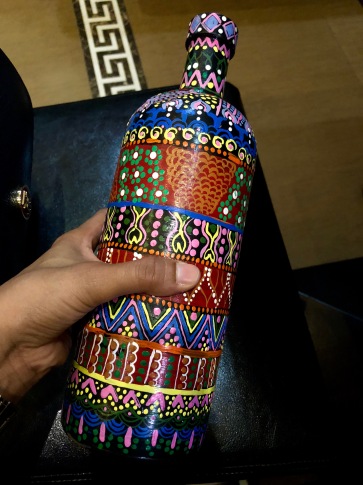 We started off by ordering a chicken, a mutton and a sea-food appetiser…. Each plate comes with four pieces of the meat laid on a bed of thinly sliced cabbage, with a few onion & lemon slices on the side. Pickles and green chutney are placed in cute Ikea bottles on the table itself. So, we had Murg Tikka Kali Mirch (Chicken Tikka with Black Pepper), Burra Kabab and Tandoori Prawns. The chicken was unanimously the winner….it was juicy, cooked well and the little dash of black pepper gave it that kick that it needed. The prawns were cooked to perfection, but the tandoori flavour was slightly lacking. The disappointment was the Burra Kebab. It is boneless lamb supposedly marinated in yoghurt with malt vinegar, papaya and ginger-garlic paste. We ordered this only because we were tantalised by the explanation of how it’s prepared. But we were disappointed, the meat was chewy and lacked any flavour. 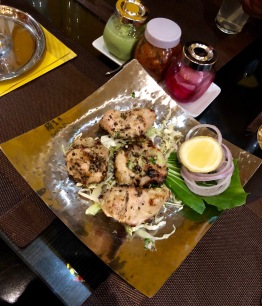 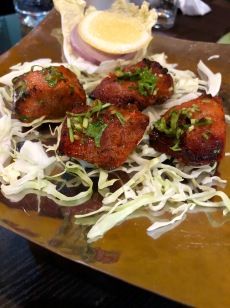 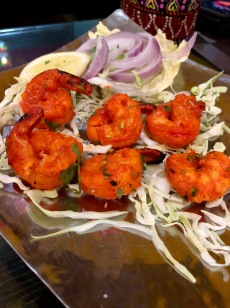 Tummies half-full and a sleeping child beside us made us quickly order just a Murg Korma (boneless chicken cooked in a brown onion and cashewnut rich gravy) with a Tandoor Roti and a Garlic Naan. The chicken curry was creamy and rich and garlic naan was a great accompaniment. 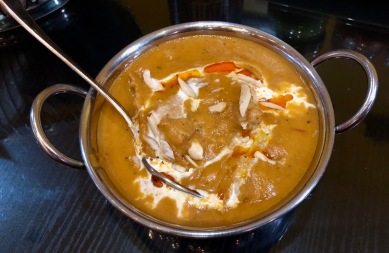 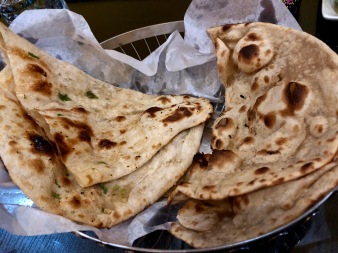 How much ever full I am, I always have place for desserts. I opted for the Carrot Halwa as it is made in-house. It was just ok, nothing much to write about. 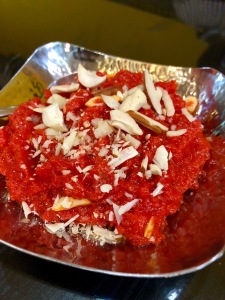 Ohh and for drinks we had Jal Jeera and Fresh Lime Soda. Both were nice.

Overall, a cute place to dine in and be amused by the hearty dialogues. They also cater to parties and get-togethers, so that you don’t have to worry too much. What are you waiting for…. get on the phone right away!!!

One thought on “Gabbar’s Grill”

𝐈𝐭’𝐬 𝐆𝐢𝐯𝐞𝐚𝐰𝐚𝐲 𝐓𝐢𝐦𝐞!!
🍮 Créme Caramel, Flan or Caramel Custard 🍮….. Call it what you want!!
Gazing away at 𝐖𝐨𝐫𝐥𝐝’𝐬 𝐄𝐧𝐝 !! Guess where this is located… 🤔
𝐀𝐭𝐨𝐩 𝐭𝐡𝐞 𝐡𝐢𝐠𝐡𝐞𝐬𝐭 & 𝐭𝐡𝐞 𝐨𝐧𝐥𝐲 𝐞𝐱𝐢𝐬𝐭𝐢𝐧𝐠 𝐡𝐢𝐥𝐥𝐭𝐨𝐩 𝐟𝐨𝐫𝐭 𝐢𝐧 𝐭𝐡𝐞 𝐔𝐀𝐄 🇦🇪!! Any guesses?
Chaat lovers, raise your hands. This one’s for you!!!
Am I a Serial Killer or a Cereal Killer??!! A cereal stalker 😄 probably, ‘coz I visited Eeten Urban Kitchen only for this!! 😄
𝐓𝐨𝐝𝐚𝐲 𝐥𝐞𝐭 𝐦𝐞 𝐭𝐚𝐤𝐞 𝐲𝐨𝐮 𝐭𝐨 𝐭𝐡𝐢𝐬 𝐫𝐞𝐬𝐭𝐚𝐮𝐫𝐚𝐧𝐭 𝐭𝐡𝐚𝐭 𝐡𝐚𝐬 𝐛𝐞𝐞𝐧 𝐬𝐞𝐫𝐯𝐢𝐧𝐠 𝐂𝐡𝐢𝐧𝐞𝐬𝐞 𝐜𝐮𝐢𝐬𝐢𝐧𝐞 𝐬𝐢𝐧𝐜𝐞 𝟏𝟗𝟕𝟔!!
Date Pudding or Mango Cake…. Which will you choose?
Beef Fry, Kerala Porotta, Chatti Choru, Biriyani, these are some of the favorites of most Keralites and these are what I tried at the relatively new restaurant that has opened at Madina Mall in #muhaisnah
Karikku aka Tender Coconut 🌴 is close to heart ♥️ for us Keralites & I happened to check this new place in #karama serving a multitude of karikku shakes at reasonable rates.
Here’s a quick look at today’s lunch & chai served in 100% compostable & biodegradable tableware from Back to Nature!!
Are you watching the Euro Cup?