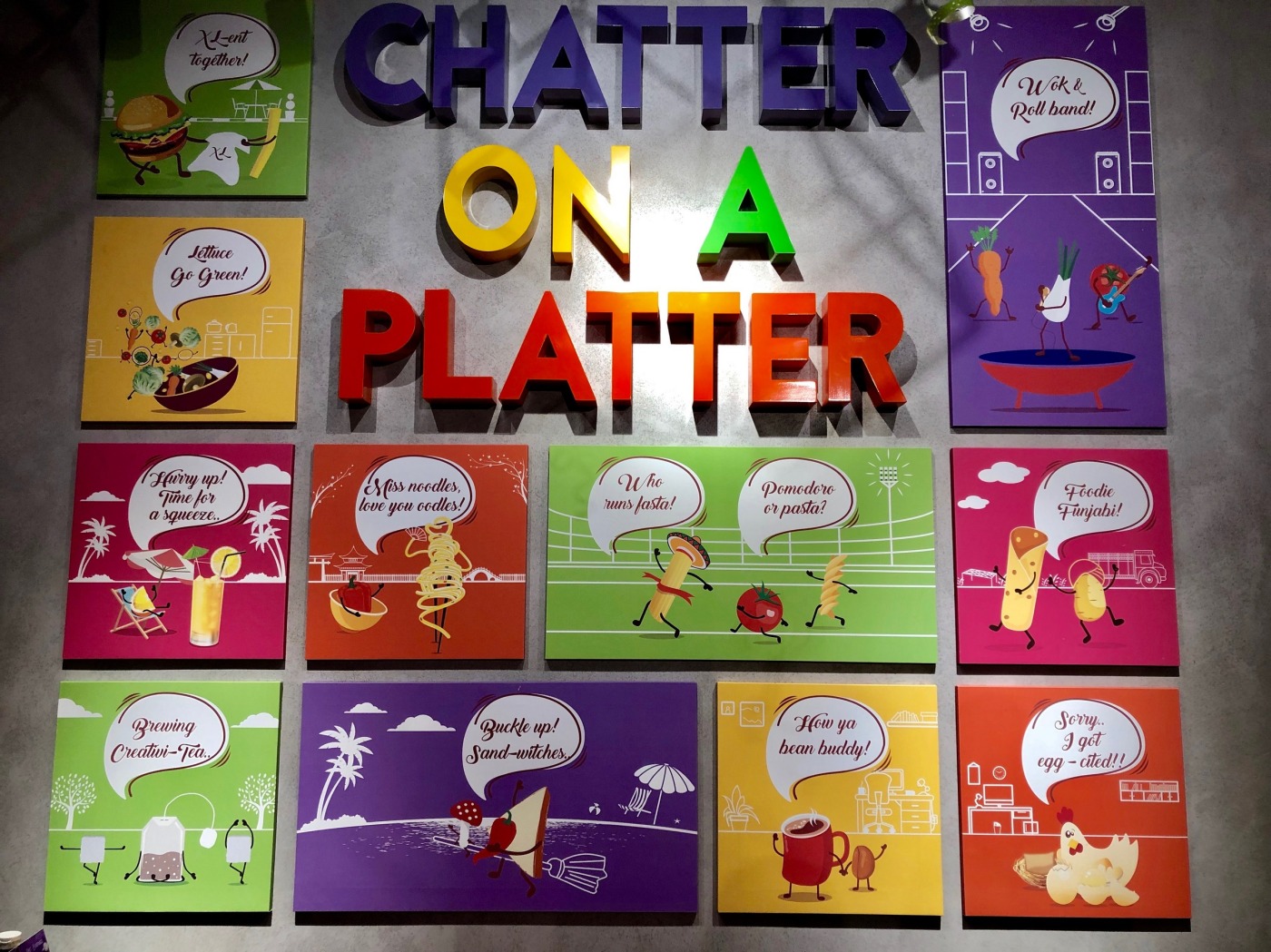 Growing up, I used to be fascinated with stories that started with ‘Once upon a time’. Utter those four words and I’d be transported into an imaginary world filled with many wonderful stories. But never did I imagine that as an adult, all the stories that I tell would begin with ‘Once upon a bite’!!! I’m not joking… It so happens that almost every conversation that I have with my family and friends is all about food, not only because I’m a food blogger, but also because we’re all food aficionados. And when I heard that a restaurant named ‘Once Upon A Bite’ has opened its doors in Dubai, I was pretty sure that I had to visit this place. And so I did, a few days back along with a few friends who were wishing the same.

Once Upon A Bite is a cute, quirky restaurant with beautiful interiors and where chatter happens on a platter. They serve veg. and non-veg. Indian and Chinese quick bites and street food. But as fate would have it, I was vegetarian that particular day and so I tried only their vegetarian dishes. 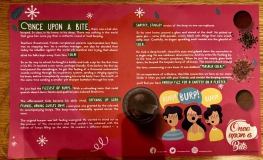 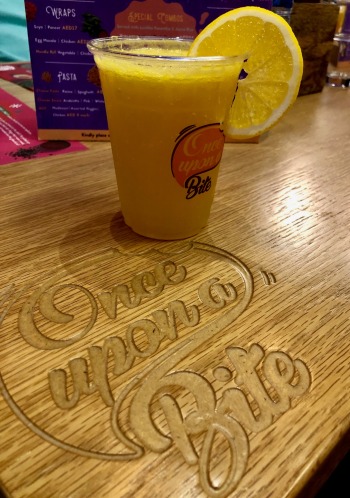 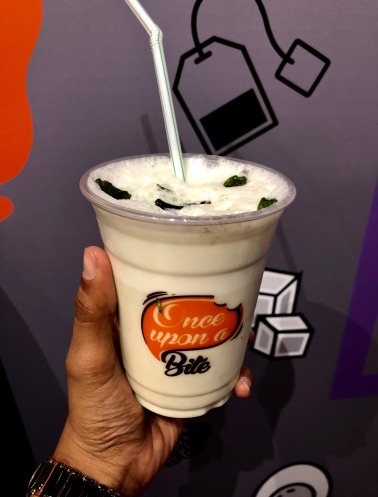 Their Special Combos are well-known, and I got to try the Amritsari Pindi Chole served with jeera rice and paratha. OMG!!! It was super delicious. The hot, soft paratha with the warm chole was heaven on earth!!! It’s very filling and the quantity is well-sufficient for two. 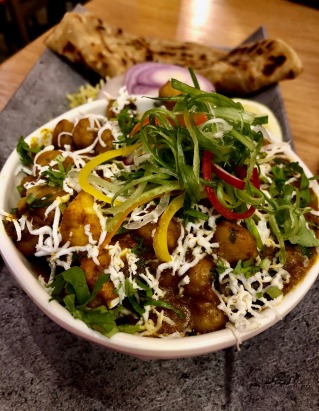 Next up was Paneer Paratha Roll, Cheese Burst Maggi and Pasta. The serving size of the paneer roll is quite huge, which is nice but I did feel that the paneer could have been more flavourful. The paratha is simply yumm. Maggi is my all-time favourite but the Cheese Burst Maggi didn’t do much justice. It was too watery for my liking. The pasta was a winner. It was spicy, and delectable.

For desserts, we had a Brownie Choco Bliss and a Caramel Delight, both with ice-creams. Both were equally delish, and I could have them again. 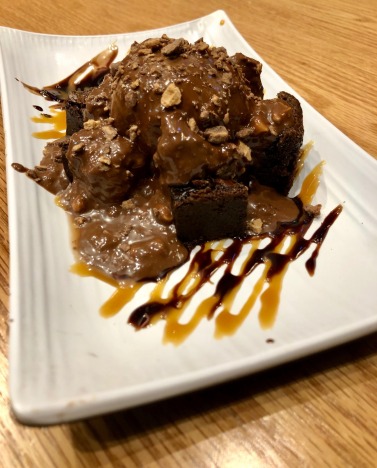 Ended the night with their very famous Shaadi Waali Coffee. It’s a very strong coffee with a lot of froth on top that stays put until the last drop.

Friendly staff, cute ambience and warm, comforting food makes Once Upon A Bite a go-to place again and again, and I definitely need to go back to try all the non-veg. dishes that I missed 😊

𝐈𝐭’𝐬 𝐆𝐢𝐯𝐞𝐚𝐰𝐚𝐲 𝐓𝐢𝐦𝐞!!
🍮 Créme Caramel, Flan or Caramel Custard 🍮….. Call it what you want!!
Gazing away at 𝐖𝐨𝐫𝐥𝐝’𝐬 𝐄𝐧𝐝 !! Guess where this is located… 🤔
𝐀𝐭𝐨𝐩 𝐭𝐡𝐞 𝐡𝐢𝐠𝐡𝐞𝐬𝐭 & 𝐭𝐡𝐞 𝐨𝐧𝐥𝐲 𝐞𝐱𝐢𝐬𝐭𝐢𝐧𝐠 𝐡𝐢𝐥𝐥𝐭𝐨𝐩 𝐟𝐨𝐫𝐭 𝐢𝐧 𝐭𝐡𝐞 𝐔𝐀𝐄 🇦🇪!! Any guesses?
Chaat lovers, raise your hands. This one’s for you!!!
Am I a Serial Killer or a Cereal Killer??!! A cereal stalker 😄 probably, ‘coz I visited Eeten Urban Kitchen only for this!! 😄
𝐓𝐨𝐝𝐚𝐲 𝐥𝐞𝐭 𝐦𝐞 𝐭𝐚𝐤𝐞 𝐲𝐨𝐮 𝐭𝐨 𝐭𝐡𝐢𝐬 𝐫𝐞𝐬𝐭𝐚𝐮𝐫𝐚𝐧𝐭 𝐭𝐡𝐚𝐭 𝐡𝐚𝐬 𝐛𝐞𝐞𝐧 𝐬𝐞𝐫𝐯𝐢𝐧𝐠 𝐂𝐡𝐢𝐧𝐞𝐬𝐞 𝐜𝐮𝐢𝐬𝐢𝐧𝐞 𝐬𝐢𝐧𝐜𝐞 𝟏𝟗𝟕𝟔!!
Date Pudding or Mango Cake…. Which will you choose?
Beef Fry, Kerala Porotta, Chatti Choru, Biriyani, these are some of the favorites of most Keralites and these are what I tried at the relatively new restaurant that has opened at Madina Mall in #muhaisnah
Karikku aka Tender Coconut 🌴 is close to heart ♥️ for us Keralites & I happened to check this new place in #karama serving a multitude of karikku shakes at reasonable rates.
Here’s a quick look at today’s lunch & chai served in 100% compostable & biodegradable tableware from Back to Nature!!
Are you watching the Euro Cup?