An Oriental Breakfast at Asia Tang

By Lizbethology in Restaurant Reviews on January 28, 2019
No comments

Asia Tang opened its doors only quite recently, but its name has become synonymous with tasty, delectable food from the Far East. When they opened, they were serving only lunch and dinner and now they have started serving breakfast too. Breakfast options include Oriental and Continental food and even Continental with an Asian twist.

I was lucky enough to be at the launch of the Breakfast menu and so I tried many of the dishes on it. My favourite ones were the Duck Wonton Soup, Thai Omlette with Kai Pad Krapow and Poached Eggs & Quinoa with Asian Greens and Soya Sesame Vinaigrette. 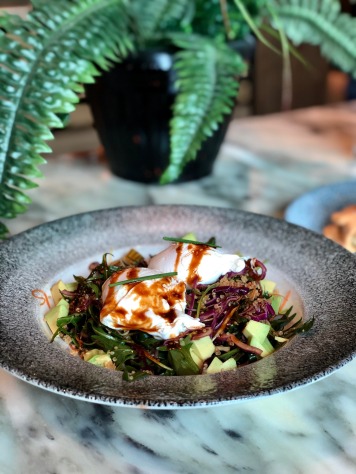 I was quite reluctant to try the Duck Wonton Soup as I’ve had some bad experiences with duck-based dishes elsewhere but this one blew me away. The broth was well-balanced and super tasty, and the duck tasted delish too, and there wasn’t any after-taste. The Thai Omlette was different from the other omlettes that I’ve tasted so far, and it was delicious. The Poached Eggs & Quinoa with Asian Greens and Soya Sesame Vinaigrette was mind-blowing. Eggs were poached perfectly and the quinoa with the greens and the dressing made a terrific combination.

Another dish I liked was the Steamed Chilli Crab Buns. These are typical Far Eastern food and resemble dumplings but are bigger and thicker. For the sweet-toothed people out there, they have Waffles with Whipped Cream & Fresh Berries. Though the waffle had a nice taste, it was a little too hard to chew. 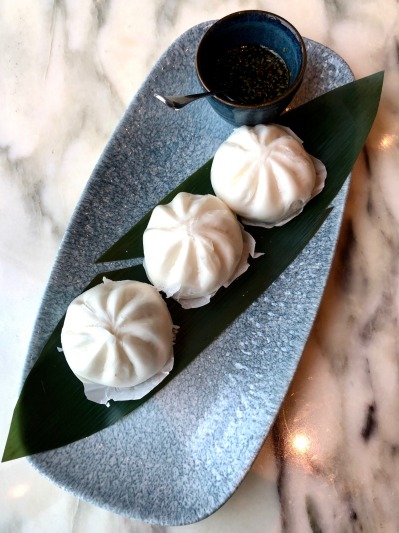 The interior of the restaurant is very well done, from the plants to the art on the wall, to the pretty pots to the cushions, much care has been given to every detail that it’s a very pretty place to dine in.

Asia Tang is located on the Ground Floor in Springs Souk, Emirates Hills.

🚨 Hidden Gem ALERT 🚨 @lammah.ae whips up some amazing lip-smackingly delicious food !! • The food here tastes as good as it looks, if not better!!! • Pictured here is Greek Chicken Souvlaki with Fries 🍟 .... spicy, juicy and mouth-watering 😋 🤤 . • Situated in Al Sharqan area of #sharjah , this place has to be on your hit list. No seating area though but definitely worth visiting!!!! • Thank you @lammah.ae for the invite & a big shoutout to Andrew, Abdul & BJ for creating an awesome experience 💕 • Check out my stories for details and keep following @lizbethology for more foodventures!!!
Fancy a Grilled Whole Fish 🎣 or maybe a Chocolate Cake 🎂...all by yourself!!! Some #sushi & some #cheese on the side, maybe... • Tried all this and more (read #squidink risotto 🦑 , #ouzi ) at the recent #grandopening of @c.centralresortae #thepalmdubai at their Waves Restaurant!!!! • Check out more details from the event on my highlights!! • Thank you @ractheadvertising & @c.centralresortae @centralhotelsae for having me ❤️ • Follow @lizbethology for more...!!
Photography is an art of observation📸 • The other day when we went to @bluewatersdubai , AJ said he wanted to take some photos with my camera 📸 . • Amongst the zillion pictures he took 🤦🏻‍♀️, this was a brilliant shot!! I was amazed.... the thought and the composition....really brilliant!!!! . • I did some editing though #momlife 😜 • What do you think of this picture?
‘Tis the last day of this year & this decade!!!! There has been many ups & downs, lots of giggles & lots more crying to sleep, said ‘Hello’ to so many new faces and even bid ‘adios’ to some, but overall, it’s been a wonderful journey, learning many new things & stepping into unknown territories . • The best part was when AJ & I were invited by @novotel_world_trade_centre to be part of the Festive Tree Lighting Event for the Children of Determination from @snfdevcenter Together We Care!!! • There were exciting games & competitions, performances by Globo & the team from @globalvillageuae and a special visit by Santa 🎅🏼 and lots of #christmascarols 🎶 🎶 • Thank you @novotel_world_trade_centre @ibisworldtradecentre & @ibisonecentral for this wonderful opportunity and Thanks to all the sponsors (tagging them below) for the wonderful gifts and Entre-Nous Restaurant for the delicious festive buffet. • Check out more pics & videos on my highlights !!!! • Follow @lizbethology for more ventures around the city!!! • @puremagicevents @brandsterlab @airfranceklm @kibsons @quantaicecream @mumzworldcom @euro_cake @babyshoparabia ❤️
Chicken Feet anyone??!! Nahh....I couldn’t get myself to try this and some other #filipino delicacies like intestines & gizzards!! HAVE YOU TRIED THEM? Tell me about it ..... • But there’s something for everyone from vegetarians to non-vegetarians from Indian to Korean to Japanese to Filipino to Arabic to Continental to Chinese to Desserts to everything!! • Entry to the #streetfoodfest @wtcad is FREE and is on daily from 5pm - 10pm untill Christmas 🎄 . • Lots of entertainment, dancing and singing and many activities to keep the kids entertained too!! • Thank you @timeoutabudhabi & @itpmediagroup for this wonderful opportunity 💕❤️
It’s #lunchtime and I can’t stop thinking about the #biriyani I had from @currychatti a few days ago..... • Whether it’s #chicken or #mutton , the biriyani is delivered in buckets and comes with chammanthi, pickle, #chicken65 #payasam ,papadam and a drink. • Are you a Biriyani person?? Let me know in the comments below 👇🏼 • Thank you @itsmennk 😍 • Follow @lizbethology all food & non-food ventures in #uae .... • Detailed review up on my blog and on #zomatouae !! • Shot on 📸 @nikonasia
Yay!! It’s the weekend!!!EAT DRINK PLAY!!! • A bloggers meet @bandstanddxb , the latest Sports Bar & Grill outlet to hit Dubai, turned into a photoshoot session as well!! Thanks @massclick for this awesome click😍 • Thank you @surenrajamohan & @bandstanddxb for having me❤️
A Protein Drink that tastes just like Chocolate Milk!!! • Thank you @sampleo_arabia for sending this Chocolate flavoured Milk Drink with Protein from Arla to try . • Arla Protein gives the right balance of energy and nutrition for the everyday exerciser. It has less augar and is low in fat. It is chocolatey and filled with protein and tastes delicious. #arlaproteinarabia
CLOSED!!! Competition Time!!! 🎁🎁🎁🎁🎁 Win a 8x8 Photo Book worth AED 229/- from @instorya.ae This is truly the answer to all those hundreds of thousands of photos on your phone that you don’t want to delete but haven’t printed either 😍 • Use the website or app to upload photos directly from your phone and convert them to cute memorabilia. Perfect for this festive season . • To participate in this competition: ⚡️Follow @instorya.ae & @lizbethology on IG. ⚡️Like this post . ⚡️Tag 2 friends in the comments . ⚡️Share this post on your IG stories or as post tagging both the accounts . • Plz note: ✅ Multiple entries allowed ❌ DO NOT tag celebrities or fake accounts. ❌ DO NOT tag same account more than once ❌ Unfollowing after the winner is announced will lead to disqualification in future giveaways. 🎁 Competition will run until Dec. 15th 9pm . • Winner will be declared on Dec. 16th. . Good Luck!!!